This month we would like to feature David Cowley, an individual at the Calgary facility. David has been with Chrysalis since 2002. Starting from 2005, he has worked at the Petland in Coventry Hills.

At the beginning, David started with Petland as a volunteer taking care of the rescued dogs and cats, and then became employed as a general helper. He has had much hands-on experience throughout the years and proved himself a valuable team member. Now, he works 4 days per week, working side by side with the stock manager. His job responsibilities include receiving, tagging, and stocking.

His work performance and ethic is highly praised and appreciated by the store manager and his coworkers. In addition to the achievement at work, David’s communication, socialization, independence, and self-motivation have blossomed. He has proudly attended the “Petland University” on weekends and passed two 8-hour courses where he learned more about dogs and cats. He is planning to take another course to learn more about parrots in March 2016! While attending the course on his own time, he arranged Access Calgary to drop him off at the training store.

David has nurtured what we believe is the true meaning of inclusion as his coworkers would give him a ride home after the training. Every Friday, David and some of his coworkers, who have become good friends, would go out for a lunch, coffee, or ice cream and have chats. David enjoys spending time with them.

On December 2015, David received the 10-year Award at Petland. He attended the Christmas party and received his award in front of his colleagues. Along with the gifts, an iPad and a $500 Visa card were presented. David was extremely proud of himself and the achievement he has made over the past 11 years.

David is humble, hard working, positive and is always willing to share his experience with his peers. He is such an inspiration to many of us! Congratulations David on your success! 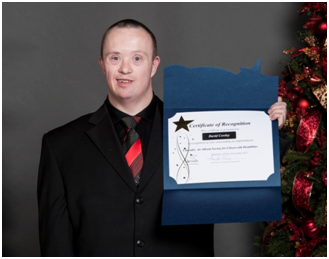